Absolut plants, produces, and hires locally in southern Sweden supporting national and international causes.
The Absolut distillery is carbon neutral certified, and one of the most energy-efficient in the world. Their 1% waste to landfill policy is made possible by creatively reusing waste, such as ‘stillage’. This protein-rich bi-product from wheat-based vodka distillation is used to feed 290,000 pigs and cows at neighbouring farms in Ahus, Sweden, every day. In Australia, Absolut is now championing reusing waste in creative ways working with local artists and makers to inspire people to reuse more and waste less!
Elyx launched a five-year (and beyond) initiative in partnership with Water For People, an organization dedicated to bringing sustainable clean water to communities around the world. So far, over 30,000 people have been given access to safe drinking water (with an eventual goal of 100,000).
The brand also supports employees’ campaigns such as The Green Hustle, aiming to reduce waste created in the hospitality industry (if you look only at the bars in London, it comes to 800,000 tons of waste every year!)

Read more about The S-word: on a mission to reduce bar waste 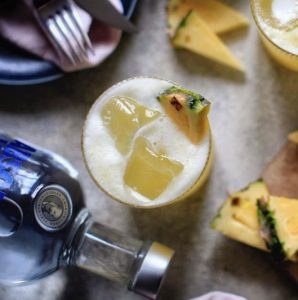