Chirps probably brings you the most sustainable protein on the planet: BUGS. They’re made out of cricket s and it’s non-GMO, gluten-free, natural.
Adding edible insects to your diet and leaving out less sustainable forms of protein can help reduce many of the negative impacts your food has on the environment. We’re not saying you should ONLY be eating bugs, but you could replace a substantial portion of the current meat-market with insects.
If you’re panicking because you heard crickets taste like crickets, and you don’t know what crickets taste like, don’t bug out. To be honest, crickets don’t taste like much and can be best described as having a subtle nutty flavor. If anything, adding crickets to your favorite foods will only clear away the flavor of guilt and make them taste even better.
The positive impact of eating bugs could disrupt resource scarcity, food waste, GHG emissions, deforestation, and malnutrition.
Why eat insects? Six reasons you may want to try:
1. Insects are delicious! From grasshopper tacos in Mexico to insect dishes as popular street food in Thailand, the United States is missing out on these delicacies. 80% of countries eat insects, and there are 1000+ varieties of edible insects to work with, all with different flavors and nutrition.
2. Insects are the most efficient living creatures for converting feed to food: 25-lbs of feed will produce 1-lb of beef or 12-lbs of crickets.
3. Fewer greenhouse gases: If we raised insects instead of cattle, we could reduce greenhouse gas emissions by as much as 60%.
4. Water: It takes 2,600 gallons of water to produce 1 pound of beef but less than one gallon to produce one pound of mealworms.
5. Health: Insects are high in protein, B vitamins and minerals like iron and zinc, and they're low in fat.
6. No cruel factory farming: No hormones. No antibiotics. Just insects being insects. Eating insects is the most humane way to eat meat.
Overall, insects are high in protein, low in fat, and full of vitamins and minerals. Per 200 calories:
• crickets have 31g of protein and only 8g of fat
• beef only has 21g of protein and 15g of fat
• a veggie patty only has 10g of protein and 6g of fat

Read More About The most sustainable protein on the planet: BUGS 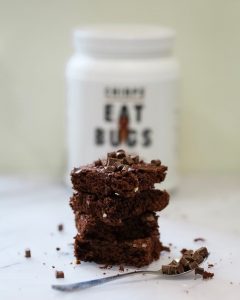 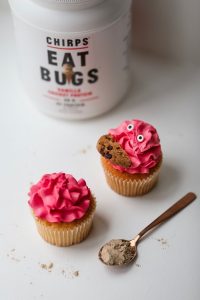 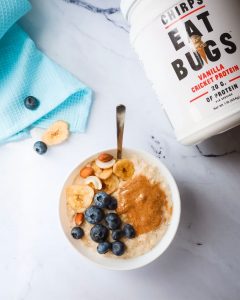